Have you ever heard of the phrase “when you’re in Rome be a Roman”? I’m sure you would have heard at least once in your life. This was the thing that got me going to Rome and spend a day as a Roman- Not a royal life rather a true roman voyager on foot

Known for the epitome of culture and leadership, roman civilization is said to be the founding ground of leadership; while most of the modern world is influenced by the roman history now, entire south Western Europe in the Italian peninsula was under the Roman Empire marking its influence over the Europe during the medieval and pre-historic era.

After churned into the fraction of what it was back then to become the capital of Italian Republic, Rome has seen it all, and today it is one of the top visiting cities in the world and the largest city in Italy.

With such a great history and huge expectation to embrace all its glory, I’ve stepped into the eternal city on a fine summer afternoon, When there was a hottest heat wave running across Europe; finishing off all the formalities at the airport and checking into my budget hotel, link down below. My first target was to visit one of the wonders of the world- The Colosseum.

OMG! It’s huge; the amount of time it took to check out the entire Colosseum was colossal and yet enriching, from being a gladiator battlefield to an execution field and after being destroyed several times by earthquakes and stone-robbers to hold the ground till now was some achievement; Colosseum truly deserves to be in the list of wonders of world.

After a tiring and knowledgeable walk across the Colosseum, satisfied my tummy with an Italian pizza, and then started to explore the ruins of the roman forum which was demolished across various battles in the Roman Empire, after which gave a visit to the Palatine hill.

One thing I observed here was the fact that why Rome is considered to be such a famous spot for the history lovers and the culture seekers, everything about the city seemed to be historic and meaningful. Every place had a story to tell and a picture to speak. That was the moment when I realized of how modernized we are and how perfect we live, yet having no mental peace.

Time has given us everything but has also taken away the meaning of life and one’s existence. Wooh, there’s that diversion. Behold, Coming back to being a Roman; after walking through the Roman Forum and Palatine hill, I had started my stroll towards this huge monument called Piazza Venezia, the only exclamation I get after seeing any structure here was OMG! It’s huge.

Went around the place and started my saunter towards Pantheon, the whole square was so lively with a fountain at the center and people around it. It was a former Roman temple and currently a church, it is considered to be the oldest building in history to still have the un-reinforced ceiling from its construction; after checking it out I started to walk towards the Trevi fountain.

Trevi fountain has a history of why it was constructed at that particular location and a meaning behind it, I would let you read about it later. But the fountain as such was beautiful, the carving of the sculptures, crystal clear water flowing through them and a tiny pond in front of it has given a modern vibe to this ancient marvel.

After barging my way through the crowd to reach the closest point of the fountain, I started my walk to the most anticipated part of my voyage- The Vatican City.

After studying in a missionary school for 9 years, I have always heard these stories about the Vatican and the churches there, finally after 25 years of my life, I got an opportunity to visit this place and I fell in love with the architecture and the intricacies of the museums, chapels and basilicas in the very first sight.

Sistine chapel, St peter’s Basilica were the two major things on my list, So I’ve given them both a visit and sat down right at the center of the town hall of the Vatican for hours to sink in the beauty and actually realize that I’ve lived my dream to walk until the world’s largest basilica on my own all alone and stand upright.

As the night ascended over the Vatican, I bid adieu to the every nook and corner of the city and started my way back to the Colosseum to give the beauty a much needed visit under the lights, and jeez, wasn’t I mesmerized? I did!

Later that  night after crossing all the lit streets of Rome, I dragged myself back to the hotel and dozed off for the night and called it a day for all means, however, the next morning I was on my feet again to visit few steps in Rome which were apparently called as Spanish steps.

I found the name interesting and gave it a visit only to realize it was a hyped location, however, the sight of a small fountain in front of these steps was actually interesting for the people to capture it or themselves in front of it.

Another place I visited after the Spanish steps was Piazza Navona, this was a huge boulevard with fountains spaced at equal distances and restaurants across the entire square, spent some time at the square and started my way back to the hotel and called off the day in Rome.

Definite things to do in Rome or in Italy is to taste the world famous Gelato ice cream and an ever hunger saviour Italian pizza and I did have both of them, the taste was scrumptious as expected. 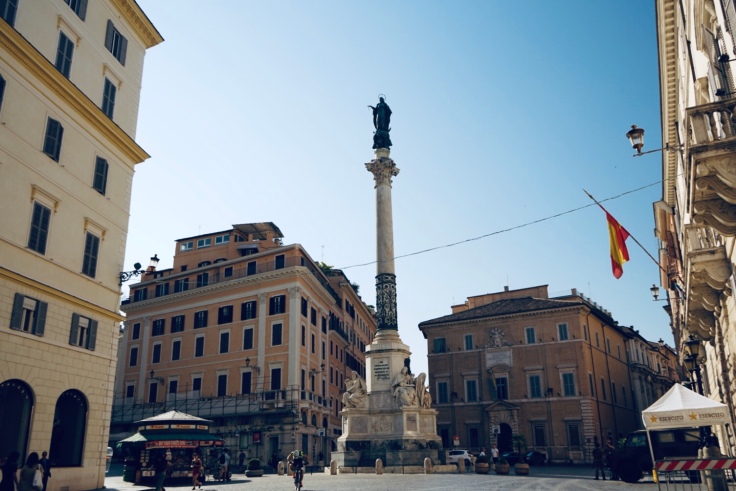 So, this was me as a Roman voyager for a day, the city will never fall short of things to mesmerize you; every road you take, every place you visit, every picture you take will have hundreds of stories to be told. Best way to experience Rome and embrace every bit of it is to walk through the city.

32 km on foot and 22 hours in Rome has given me a story to be told for a lifetime, do read my other travel experiences down below, until next time, happy reading and happy traveling.